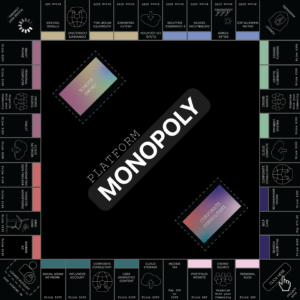 Even when it looks similar to past iterations of monopoly, the rules of platform monopoly are slightly different. Instead of rental property, the object is to collect intellectual property . Instead of houses and hotels, there will be servers and data centers. A less random mechanic will let users feel like this gamified experience requires more strategy and skill. It is possible to win by buying up every startup and all the infrastructure but it is also possible to win by teaming together with other players to stop one person from owning the board. 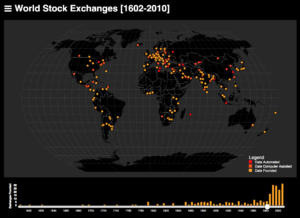 The first modern stock exchange was established in 1602 in Amsterdam to trade paper stock certificates of the Dutch East India Company. Stock exchanges have since transformed into complex digital infrastructures spanning the globe. There are now nearly 300 exchanges. In 2018 I began building a database of world stock exchanges based on data obtained from Handbook of World Stock, Derivatives and Commodity Exchanges. At https://www.automatedfutures.net/map/ you can explore the history of stock exchanges.

File formats rule the world. They are the procedural means by which unintelligible blocks of code are rendered intelligible, actionable, and transmittable. Embedded in a file format are assumptions about how data can or should be used. Jpegs discard information assumed to be unimportant to human eyes, and replace it with best-fit estimates, so long as they can save some room on your hard drive. Mp3s assume, through psychoacoustic models, what counts as an acceptable rendition of a song. Other file formats are proprietary, such as .excel. Through their technical specifications, they require programs to be bought in order for files to be used. But the file formats experienced by the average user only comprise a small percentage of the the file formats that the economy and culture of modern society depend upon.

I have been playing a game recently, where I pick a file format at random from the Wikipedia list of file formats: https://en.wikipedia.org/wiki/Listoffile_formats

Then I try to imagine what the would be like if the file format never existed. Though I have never heard of most of the file formats on the list, many are essential in their own banal way. For instance, the first file format I opened was OTA Bitmap — a file format created by Nokia for displaying those highly pixelated images exemplary of the mobile phone circa Y2K.

The website for the file format that undergirds banking information exchange is remarkably transparent:

“If you’re not participating in Standards Development, then you’re either re-inventing the wheel or playing by somebody else’s rules!”

The vast majority of us are not participating in Standard Development. But we all rely on file formats to turn what looks like random sequences of 1s and 0s into intelligible information. Whenever computers manage to pull off the task of representing value, they are likely doing so with one of a handful of file formats. We trust — through blind ignorance — that companies responsible for producing these file formats represent value faithfully, but as their website forewarns, companies create the rules by which everyone else has to play.

Automated Futures is a sensory ethnographic documentary film that illustrates two eras of American economic history by juxtaposing a specialty fiber-optic cable used for high-frequency trading against the decaying infrastructure of the once industrial Rust Belt, emphasizing an eerily parallel detachment from human lives in both of these planetary-scale built environments. The film documents 827 miles of Spread Networks’ flagship dark fiber line through the now post-industrial towns of La Porte, Elkhart, Toledo, Cleveland, Mesopotamia, and Manahoy City. Based on my thesis research on the materiality of financial infrastructure, the documentary addresses the operative tension between human agency and technological interdependence within the cultural context of American Independence Day celebrations. Video and audio recordings from the summer of 2013 serve to archive the paradigmatic disjunction between the interests of high finance and the decaying industrial economy, while the structure and soundtrack of the film conspire to question the role of history in the temporal scale of exchange.