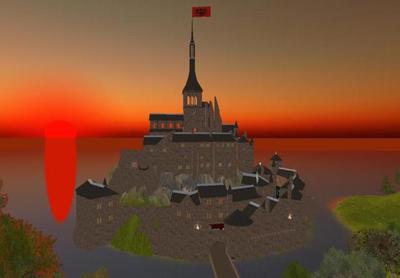 An Island of the Blessed

Atmospheres pose a vexing problem to libertarian ideologies. How do you square shared atmosphere with radical libertarianism? This thought first came to me as I was exploring Second Life in 2014, the well known virtual utopia where there are few laws, no taxes and everyone is at liberty to express their own individuality. While exploring Second Life realized that the virtual world has no commons. All land is privatized. Some landowners let you visit their property for free, especially if it is a store. To build anything, however, you must be a landowner yourself. To be a landowner you must pay rent to Linden, the company that owns Second Life. All interaction is mediated by an expansive market that carries everything from new hair-dos, to houses; —even custom animations for gestures and emotions are for sale. Every everything is an asset– there is no atmosphere.

I first visited second life to track down the story of Carmen Hermosillo. A folk hero in some internet circles, Carmen Hermosillo is self proclaimed semiotician and cultural critic who drew most attention from her early criticism of the internet in the now classic essay “Paradox Vox”.

In 1994 the internet barely had a graphical user interface. Carmen Hermosillo frequented Stewart Brand’s online messaging board WELL (short for Whole Earth ‘Lectonic Link). She was an active participant in the online community and enjoyed her anonymity under the pseudonym ‘humdog’. Under mounting concerns — both personal and political — her attitudes shifted, she switched, unleashing a stinging polemic, spawning flame wars like brush fire on a hot summer afternoon. In her essay, she denounces Believers in the internet, writing “it is fashionable to suggest that cyberspace is some kind of island of the blessed where people are free to indulge and express their Individuality” but, she argues, “in reality, this is not true.” In reality, online services “guide and censor discourse,” in reality, “cyber-communities are businesses that rely upon the commodification of human interaction.” Humdog points to her own thoughts, her feelings, her own guts that she’s spilled as that which she is alienated from herself, for no compensation, for the monetary benefit of telecom or sitemasters.
Beyond social critique, humdog addresses a more intensive problem: the ontological tension between representation and reality as a subject of human attention. She suspects that “cyberspace exists because it is the purest manifestation of the mass (masse) as Jean Beaudrilliard[sic] described it. it is a black hole; it absorbs energy and personality and then re-presents it as spectacle.”

It is odd that humdog insists on misspelling Baudrillard’s name. By inserting an ‘e’, humdog transforms the name, intentionally or not, into a frankenword that captures a foundational tension in the experience of the internet. “Beaudrillard” reminds us of both the simulacrum as well as the “beau” or beauty that draws us in — conflicting forces of beauty and horror contained within the the ‘discrete’ bits of information that compose an increasing proportion of contemporary experience. This is the paradox, we are enamored by new forms of control, seduced but also horrified. As she says in her own words “the heart of the problem of cyberspace: the desire to invest the simulacrum with the weight of reality.”

The neologism is all too tragic for it perfectly encapsulates Carmen Hermosillon’s own life and premature death. Despite conceptualizing the negative psychological and social effects that the internet creates as a medium for the surveillance and commodification of human pathos, Carmen Hermosillo couldn’t resist its magnetism. This was not for want of trying. Carmen Hermosillo, after killing-off humdog in protest of WELL, attempted to unpluged herself from the internet.

She cycled through numerous internet identities, eventually surfacing on the shore of what appears to be her own ‘island of the blessed.’ But this time, the island was less of a metaphor, and more of a manifestation made real, or as real as it gets in the virtual. In second life, Carmen Hermosillo designed and built a virtual island called The Island of Shivar, where Carmen was a Queen. Neither humdog, nor Carmen anymore, she was known as “Queen Montserrat Snakeankle aka Montserrat Tovar aka Sparrowhawk Perhaps.”

With the aid of a Second Life architect named Yolandi and a large group of friends, she had a beautiful french kingdom constructed. But like a self fulfilling prophecy–or perhaps just acceptance of the terms given–Carmen’s “magical island” was also a business. Her collaborator and friend Mark Meadows wrote in I, Avatar that the early days of Second Life were just like the Southern California in the 1920s, “there were a thousand get-rich-quick-schemes” (Meadows, 2008).

Carmen ran the Island of Shivar selling real estate while Mark would furnish buildings to increase their value. Their goal was to make $200 US a month all in game, enough to cover IRL rent at the time. The strategy was to build a cathedral to do weddings, but that only brought in 2,000 or so Linden (Second Life dollars), hardly pocket change in US currency. So they decided to open up shops — a virutal stripmall nestled into the cobble stone streets of her french island kingdom. It took some time, but eventually business picked up. They had vendors selling eyeballs and hair, shoes, utilities and furnishing, high-fashion clothing, biker gear, bodies, pinup girl posters, paintings and avatar animations. However, by 2006 Second Life was getting really mass media attention. Meatspace corporations like IBM, Toyota and Sun Microsystems started developing Second Life stores and the real estate prices went up. According to Mark, Carmen earned more than $100,000 real world dollars that year. From this vantage, humdog’s dictum, “the heart of the problem of cyberspace: the desire to invest the simulacrum with the weight of reality,” seems prophetic, though the problem did not manifest for her yet.

If she was attempting to give the utopianism of the island of the blessed a second chance, it is both an irony and a tragedy that she chose Second Life as the digital domain of her private paradise. Second Life epitomizes the randian imaginary of floating individuals attempting to manifest their private dreams. Second life was the most literal manifestation of the liberal impulse towards individual “self” realization, because it was designed with pervasive property rights such that anything could be bought and sold—including gestures, and emotional displays. A space where every interaction is transactional amplifies the contradictions of capitalism, as well as its seductions. If everything can be property, what of human life?

As Carmen’s real life and online life became more entangled, things began to get weird. As Mark Meadows puts it, “Involving money in the equation of our little world changed everything. Not because we were making money, but because we had invested our real lives” (Meadows, 2008). Carmen began investing more than money into the online world. The information that can be gleaned from what are admittedly somewhat questionable sources, such as Second Life’s online newspaper, the Alphaville Herald, suggest Carmen was deeply involved in an massive online role playing world patterned off the fantasy series by John Norman, Gor. Devotees to this fantasy world, Goreans as they are called, believe in a radicalized form of institutionalized male dominance whereby women are meant to be sexual slaves. Second Life, with its anything goes policies towards sexual slavery, rape play and other extreme fetishes, has become somewhat of a Gorean utopia, with hundreds of islands fashioned after the worlds described Norman’s fantasy novels. The gender dynamics have their complications, however, as many users drive multiple avatars with genders across the spectrum. To put it bluntly, you might be a die hard gorean master who owns a female slave that, unbeknownst to you, is actually some dude. Despite the complications of practice, the discourse surrounding Gor is squarely misogynistic, based on crass essentialisms of female vs. male strength and intellectual competence –where the ideal woman is that who ‘recognizes the true power’ of her male master, and freely sells herself into slavery to him. As Gor-pedia puts it:

“The woman enters into this arrangement freely; she cannot, of course, withdraw from it in the same way. The reason for this is clear. As soon as the words are spoken, or her signature is placed on the pertinent document, or documents, she is no longer a free person. She is then only a slave, an animal, no longer with any legal powers whatsoever.”

While no such contract would be upheld in the court of law, the philosophy of Gor is taken so seriously by some in the Second Life community that the fantasy lifestyle becomes a sort of lived reality. Some goreans claim to be ‘in-world only’, presuming that their actions are confined to the boundaries of second life. As the line between IRL and cyberspace blurred, many gorean slaves found themselves psychologically affected by the fantasy culture. Carmen recognized her emotional involvement but did not take it as a cue to get out of the demanding relationship. Her response was to hire a psychologist to help other gorean slaves in second life through an in-world therapy center.

“Carmen had become arm-wavingly passionate about setting up a sort of halfway house for abused slaves that the Gorean play groups had chewed up and spit out. Carmen went so far as to hire — and pay — a psychologist to come in-world and talk to these “girls” (they may well have been men), to help them get over the misuse their “masters” had played out on them. So, like a world made of onion skins, psychological layers of role-play were wrapping around the already visually layered “worlds” that everyone agreed were real because, well, they were.”

Of course, in a fictional psych ward on a virtual island in a make-believe France in a replica of a science fiction slave-trade world based on John Norman’s novels — well, there was plenty to think about. Here we have a scenario where an intelligent early critic of the internet, who was one of the first to warn the world that the internet is not ‘an island of the blessed’ became so deeply invested in the online role-play of a science fiction fantasy series based around baseless sexual contracts that she decides to set up a psych ward on a virtual island staffed by actual therapists, paid for possibly by money made from selling digital real estate for US currency. As Hermasillo put it so succinctly: “Beaudrillard”

This story does not have a beautiful ending. There is a sense that Carman became subject to her own prophecy, without heeding its ill omens. Though her sister vehemently denies it, some of Carmen’s online friends suggest that in response to a mix of financial trouble and a failing online gorean relationship, Carmen stopped taking her heart medication and passively committed suicide after deleting all of her online accounts. I think about this history often with a sense of unease, as if her life may be a continuation of the prophetic vision laid down in Paradox Vox.